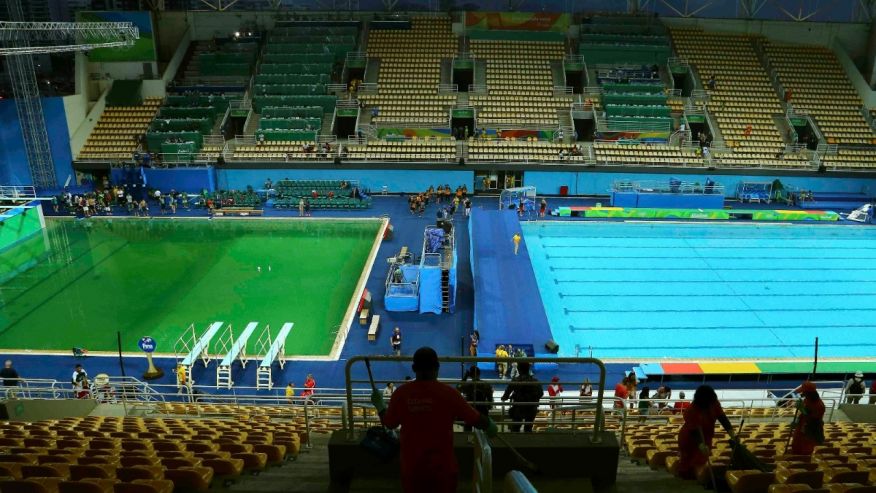 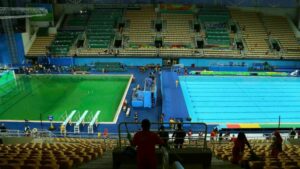 Get ready, set, hold on a minute the water is green?
What really did happen the pools in Rio?
After offering little clarity about why the water in two Olympic competition pools mysteriously turned green, Rio 2016 officials have said it was because a a contractor poured hydrogen peroxide into the diving well and the large pool in the centre. The chemical reacted with the chlorine and turned the water an emerald green and increasingly murky.

Officials initially blamed the color on sunlight and lack of wind in the open-air aquatic center, which is used for diving, synchronised swimming and water polo, obviously to give an answer to the press and not leave a ‘no – comment’ situation to turn quicker than the water!

Hydrogen peroxide is a de-chlorinating agent, which means it undoes what chlorine is supposed to do — kill germs and keep water clear. That could explain the murkiness that resulted, and as the days went by, only got worse.

Rio officials maintained that the water was not a health hazard to athletes, and training sessions and competitions continued in the green pools.

But shortly afterwards, the pools were drained so the increasingly swampy water could be replaced with fresh water in time for synchronised swimming, which requires competitors and judges to have good visibility underwater. The process took six hours, according to the AP, and another four hours to fill the pool again.

“Of course it is an embarrassment because we are hosting the Olympic Games,” Rio 2016 spokesman Mario Andrada told the AP. “It should be light blue, transparent. We could have done better in fixing it quickly. We learned a painful lesson the hard way.”

Preparation is key in these situations but also being able to deal with problems if they arise with the correct tools and management to rectify.